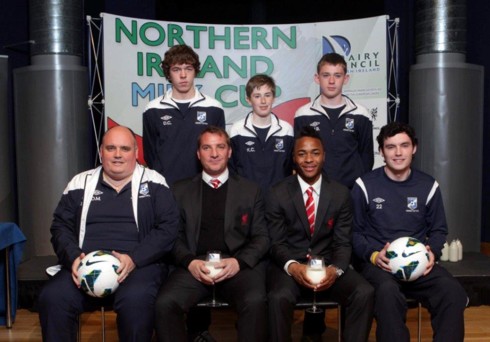 There was great excitement last tuesday in the Odyssey Belfast as the Milk Cup draw took place and paired the young stars of the Cavan Monaghan underage league with premiership giants Liverpool FC and Southampton FC in this years Northern Ireland milk cup tournament. Liverpool FC manager Brendan Rodgers and Liverpool/England winger Raheem Sterling carried out the draw which was streamed live to the world on BBC Northern Ireland.

The excitement grew as premiership side Southampton FC were the first team drawn into group 4 followed by the merseyside giants Liverpool FC. Already on a high from qualify for the All Ireland semi final two days earlier three of the squad, Ballyjamesduff FC Karl Cosgroveand Dylan Murdockplus Monaghan United FC Micheal Bannigan were joined by head coach Oliver Martin and coach Gary Martin in the audience to watch with delight as Raheem Sterling drew out the Cavan Monaghan underage league into group 4 with the final place in the group going to County Tyrone, a side made up mainly of players from Northern Ireland under 15 champions Dungannon United FC.

Head Coach Oliver Martin said “ Getting one of the biggest names in world football Liverpool and premiership new boys Southampton in the same group is a brilliant draw for the players and a great reward for the years of hard work they have put into the CMUL and emerging talent programme and when you consider some of the biggest names in world football like Wayne Rooney, Sergio Busquets, David Beckham, Jermaine Defoe and Ryan Giggs to name but a few have graced the Milk Cup its going to be an experience the lads will never forget.”

The Milk Cup is an international youth football tournament held annually in Northern Ireland. The cup matches will be played between 28th July and 2nd August and are mainly played in the North Coast area of Northern Ireland, with matches taking place in the towns of Portrush, Portstewart, Limavady, Coleraine and Ballymena. In last weekends English premiership matches no less than 54 players had previously participated in the Milk Cup and all eight teams participating in this seasons Champions League and Europa Cup Barcelona, Real Madrid, Dortmund, Bayern Munich, Chelsea, Benfica, Fenerbahce and Basle have all sent teams to participate in recent years.

Head Coach Kieran Donnelly “ I am delighted we have been invited to  participate in the Milk Cup because it will not only be an opportunity for the players to have played in all four of the major tournaments in Ireland  both north and south but it is also a reward for the involvement of the CMUL in the peace three initiative having played so many cross border games against sides in the north and the close connection the CMUL has with both Glasgow giants Celtic and Rangers. Also I don’t know for sure but I would regard this as a great achievement for this group of players as I don’t know of any other team that has competed in all four tournaments.”