A very successful week for the CMUL under 14 squad down in Limerick.

The Cavan Monaghan underage league (CMUL) under 14 squad attended the prestigious Kennedy Cup. The Kennedy Cup is made up of 32 team from all over Ireland. The competition runs from the 7th – 12th of June with a total of 96 games on 8 pitches from Monday to Friday. The CMUL were in group 4 along with Mayo, Drogheda and Kildare. The first game was against Mayo on Monday evening and the Cavan Monaghan underage league started very nervously. At half time in the game the team were 2-0 behind. A quick start to the second half by Mayo left them 3-o up, but the Cavan Monaghan underage league started to press the Mayo team back and pinned them in their own half. With five minutes left in the game, Mark Melvin reacted to a ball bouncing in the box and tapped it into the back of the net. A minute later Paddy Mc Phillips played a ball through the middle of the Mayo defence for Bradley Okaidja to latch onto and tuck past the goalkeeper. The CMUL had more chances but could not take them to draw the game and eventually ran out of time. The Cavan Monaghan underage league manager Stephen Mc Sherry felt positive that the team could still come top of group 4 even with this defeat.

On Tuesday it would be the toughest day of the competition as the team had to play the remaining two matches in the group. First up was Drogheda who lost to Kildare on Monday evening. Playing in very warm conditions the CMUL started timidly the first 10 minutes, giving away two chances to Drogheda from corners. The Cavan Monaghan underage league started to get into their stride and scored a goal just before half time by Aaron Mc Cabe. In the second half the team created more chances, getting the second goal halfway through the half. Oisin Brady was fouled in the box by a Drogheda defender after tricky dribbling of the ball. Leon Mc Cabe stepped up and took the penalty and successfully scored it. The CMUL eventually ran out 2-0 winners.

On Tuesday evening Kildare awaited the boys from Cavan Monaghan underage league, and having beaten Mayo earlier in the day they needed just a point to secure top spot, while CMUL needed to win and see how the Mayo/Drogheda game fared to have a hope of coming top of the group. CMUL started very positively with two great chances hitting the target by Leon Mc Cabe and Donnacha Swinburne. Kildare were a very good passing side but the CMUL played a pressure game not given their players any time on the ball. In the second half, Kildare created a few chance around the box but Matthew Mc Gahern was never under severe pressure in goalies. The Cavan Monaghan underage league would counter-attack the Kildare side finding gaps in behind their midfield. With only five minutes left, Aaron Mulligan received the ball, 30 yards from goal and struck the ball in top corner of the net to leave CMUL 1-0 up. Aaron Mulligan received player of the day at the Kennedy Cup on Tuesday for his midfield performance and his goal. Two minutes later, Kildare pinned the CMUL back and started passing the ball around the edge of the box when an unlucky deflection got through the defence and the Kildare left back ran through to side foot the ball into the bottom right corner of Matthew’s goal. The result ended 1-1 draw between Kildare and the Cavan Monaghan underage league.

This meant CMUL were against all eight second-placed teams in the Kennedy Cup Bowl Competition, where some really strong teams were placed. On Wednesday, the CMUL were drawn against a physical South Tipperary side in the quarter final of the bowl. The South Tipperary team started well against the CMUL and where a threat from free-kicks and corners. They created two opportunities that the Cavan-Monaghan goalkeeper Finn Botscher made great saves from. Up the other side the CMUL striker Aaron Mc Cabe had a great opportunity with a one on one chance with the South Tipperary goalkeeper but the goalkeeper saved with his feet. The South Tipperary side eventually took the lead halfway through the first half with a well struck shot from the edge of the box. The Cavan Monaghan underage league responded with a well worked team goal just before half time with Paddy Mc Phillip passing to Oisin Brady and receiving the ball back to lay the ball through the South Tipperary defence for Leon Mc Cabe to run on and slot past the goalkeeper into the left side of the net. The second half started well for the CMUL with Oisin Brady and Leon Mc Cabe hitting the target. The second goal for Cavan –Monaghan came from an attack by South Tipperary breaking down and Mark Mooney playing the ball down the line to Oisin Brady, who chipping the ball over the defence for Leon Mc Cabe to get into the space behind South Tipperary’s defence and score under the goalkeeper. A few minutes later, Bradley Okaidja picked the ball up on the edge of the box and curled the ball into the top right side of the net leaving the goalkeeper with not a chance. The South Tipperary side got a player send off for a bad tackle on Mark Mooney with 10 minutes left. The game was not a dirty match it was played in a good manner. The CMUL played some really good football and finished comfortable winners 3-1.

Next up on Thursday afternoon was a very tough test against Wexford side that have a great pedigree in the Kennedy Cup. Stephen Mc Sherry knew this was going to be a tough match with the Wexford side having an unusual formation and very quick tricky players on their wings. The Wexford team started quickly with them creating two chances which were well saved by Finn Lotscher. The Wexford side eventually thought they had scored from a cross which was ruled out for hand ball. The CMUL started to create chances with Leon Mc Cabe and Paddy Mc Phillips having shots saved by the Wexford goalkeeper. The Cavan Monaghan team finally scored after their chances with Donnacha Swinburne breaking down the left wing and playing a ball through to Bradley Okaidja to score past the Wexford goalkeeper.   A few minutes later, Paddy Mc Phillips ran at the Wexford defence and got passed two players to slot the ball under the goalkeeper to give the CMUL a 2-0 lead at half time.

The Wexford team never give up and came out strong in the second half and put pressure on the CMUL defence. The CMUL had chances with Oisin Brady and Paddy Mc Phillips on the counter-attack as Wexford where leaving spaces in their defence. Wexford got a goal from a cross halfway through the second half when the Wexford defender was left free to head into the top left corner of the net. Wexford then got a second goal with the ball bouncing around in the penalty box and the CMUL not been able to get the ball cleared, the Wexford striker got a shot at the goal which was saved by Finn Lotscher and rebounded back to the striker to side foot into the corner of the net. This left the game 2-2, but the CMUL responded well with a run by Bradley Okaidja who went past six Wexford players but he was pushed wide and miss hit his shot. The CMUL had another opportunity in the last minutes of the game when Sean Mc Evoy ran from the halfway line and broke past four Wexford players when eventually he was took down in the box, but the referee decided it was a free on the edge of the box. The Wexford defender was send off for a last ditch tackle. This opportunity came to nothing. With a large nervous crowd in attendance the match went to penalties. CMUL went 2-0 up in penalties with Leon Mc Cabe and Paddy Mc Phillips scoring. Finn Lotscher made a great save and the other penalty went over the crossbar. The next two penalties were missed by the CMUL and Wexford converted their two penalties to leave it 2-2. It came down to the last penalty and Wexford missed their penalty and Bradley Okaidja side footed the ball past the goalkeeper to score for Cavan-Monaghan to get them through to the final where their Ulster counterparts Inishowen were waiting. Inishowen had defeated Donegal 2-1 in the other semi-final of the shield.

As the game tipped off on Friday morning both teams looked a little nervous and tired from the semi-final the afternoon before. The CMUL lads settled very quickly and took hold of the game. They were playing the better football but could not seem to convert their chances. Aaron Mc Cabe had a great penalty claim in the box but the referee did not agree. The Inishowen team were a physical team who looked to kick the ball in behind the defence and get the Cavan-Monaghan players turned round, waiting on a mistake to be made. In the second half Inishowen created some chances from crosses and free kicks but Finn Lotscher saved these chances. In the last moments, Bradley Okaidja created a great opportunity when he took on the defence and tried to curl the ball in top left corner of the net but it just screwed wide. The game went to extra time and the CMUL stilled looked like getting the elusive goal to win the final but it never came. Again penalties were going to decide who were the winners of the bowl final. Leon Mc Cabe scored the first penalty and Inishowen converted their penalty. The CMUL missed their second penalty and Inishowen went 2-1 up in penalties. Paddy Mc Phillips scored his penalty and Finn Lotscher made a great save to leave it 2-2. The next three penalties were converted by Aaron, Mulligan, Emmet Boylan and Bradley Okaidja. The Penalties had gone into sudden death and Inishowen missed their seventh penalty to leave Marc Melvin to score to win the Kennedy Cup Bowl. Marc put the ball in the top left corner of the net leaving the goalkeeper with not a chance. Cavan Monaghan won 6-5 to claim a historic win.

This squad followed in the footsteps of the 2012 squad in capturing the Kennedy Cup Bowl for a second time along with the league’s highest ever 9th place finish in the competition. This is the third CMUL squad that has picked up silverware this year with the under 16 squad winning the Stoke International Cup earlier in the season while a few weeks ago the under 13 squad won the Gerry Reynolds/Belfast Cup.

The CMUL under 13 and under 15 squads will be travelling to Galway in August to compete in the Macron Cup with hopes of being successful. It is the aim that many of these players will eventually be playing in the Airtricity under 17 league within a few years with the Monaghan United Cavan Football Partnership team.

The squad and management would like to thank all parents and families for all their help and support during the Kennedy Cup. The squad wishes the two teams going to Galway the best of luck in their competitions and hopefully bring back some silverware. 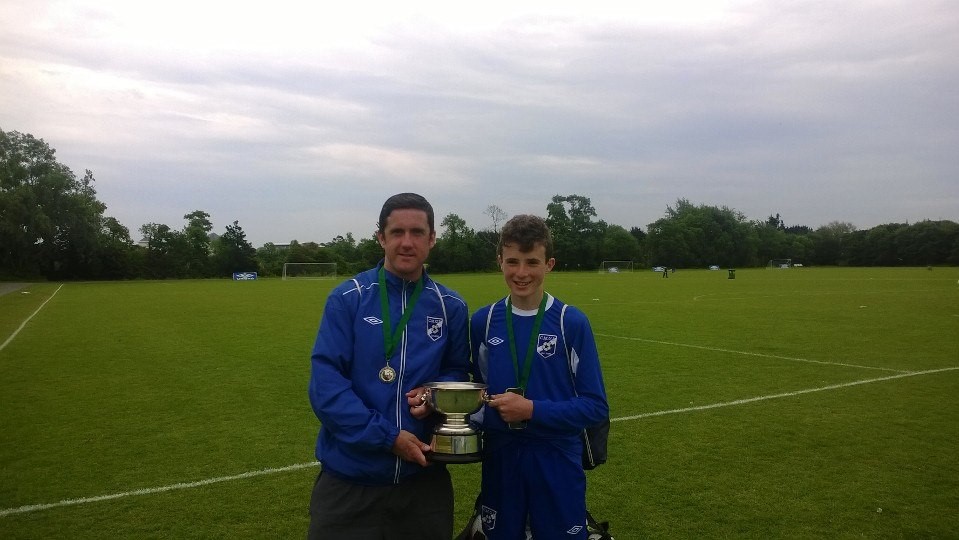 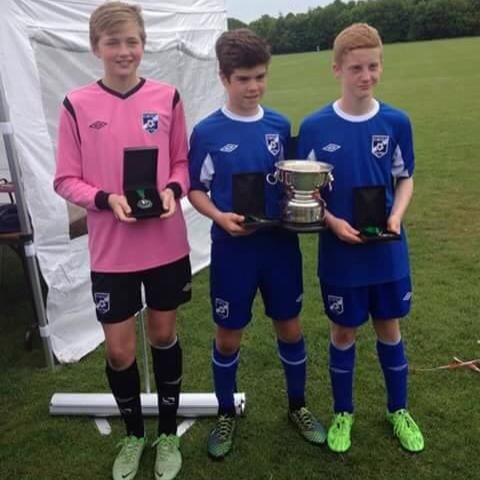 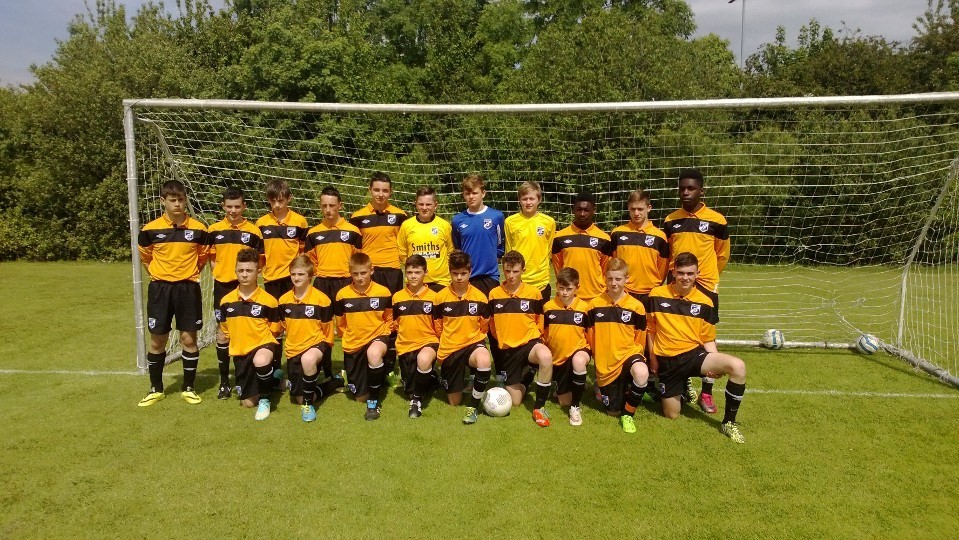 The successful Kennedy Cup Squad, who finished ninth from 32 teams.

The Cavan Monaghan underage league team after 2-0 victory over Drogheda. 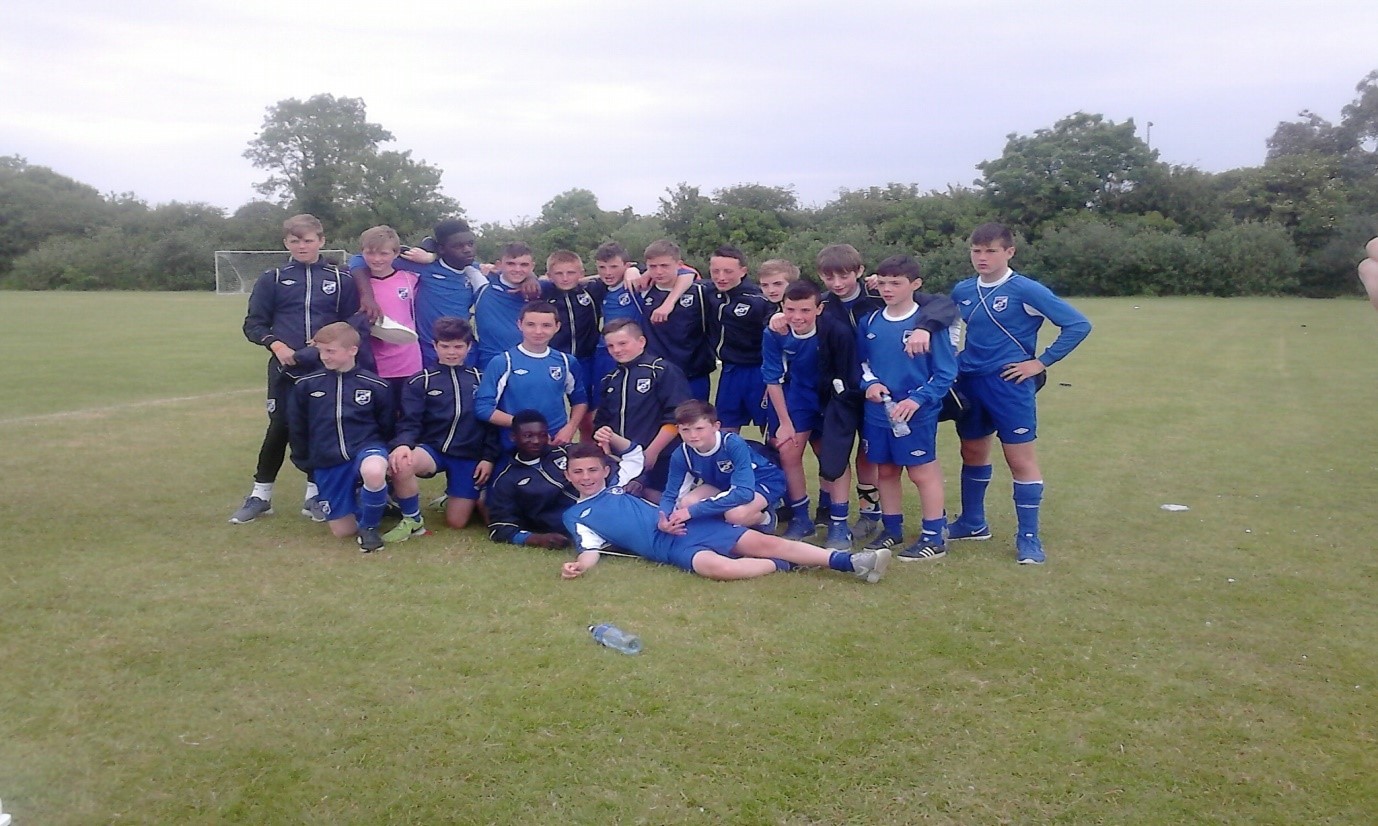 Celebrations after beaten Wexford on penalties in the semi final 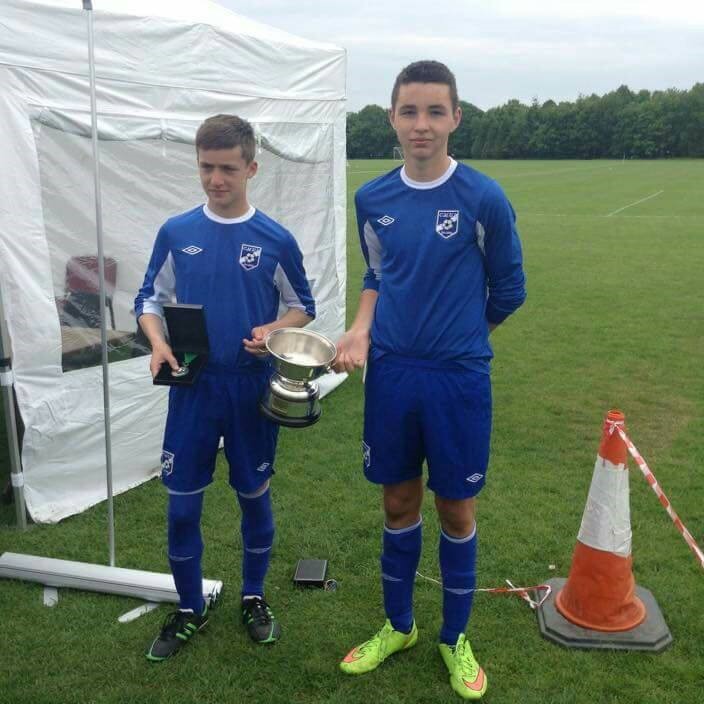 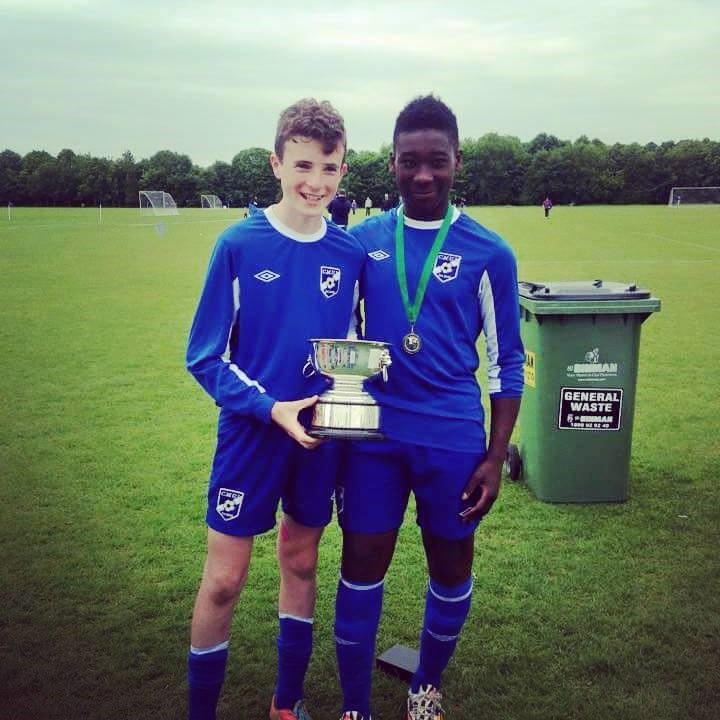 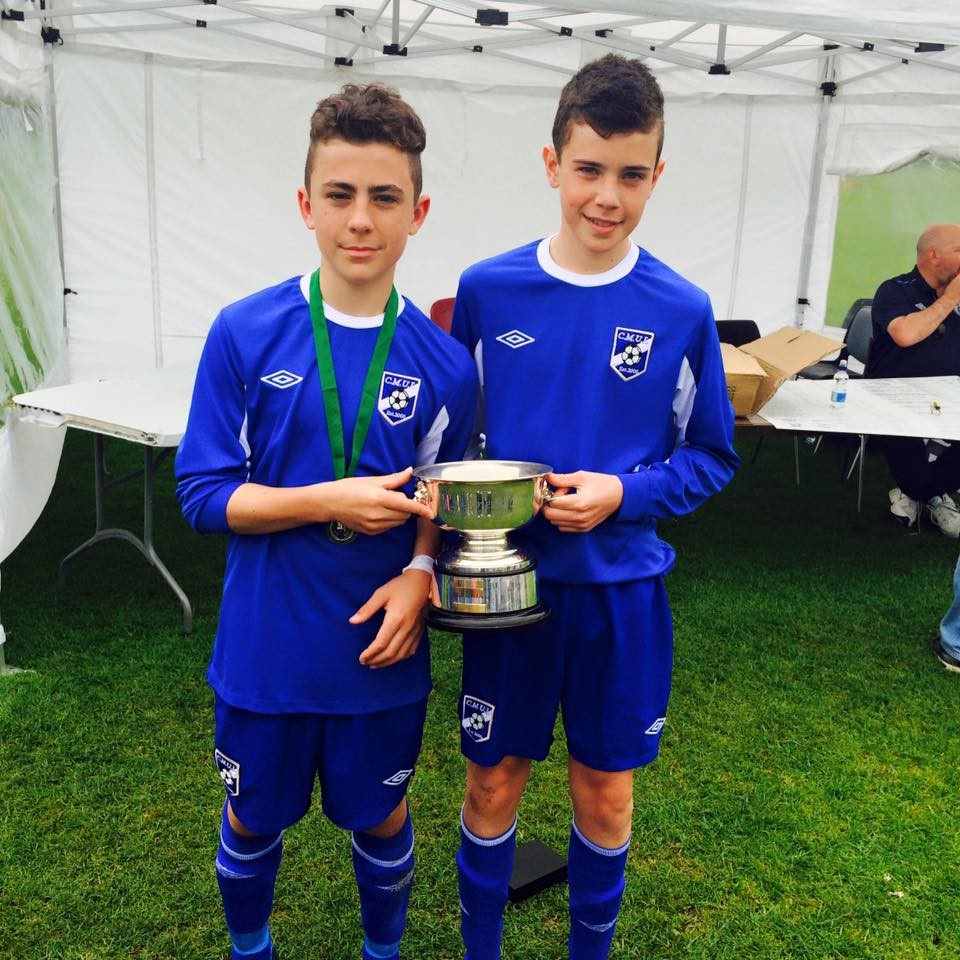 Two players who had a great performance during the Kennedy Cup Tournament Marc Melvin and Conor Mc Cooey.

Thanks to Ciaran Cassidy for report.