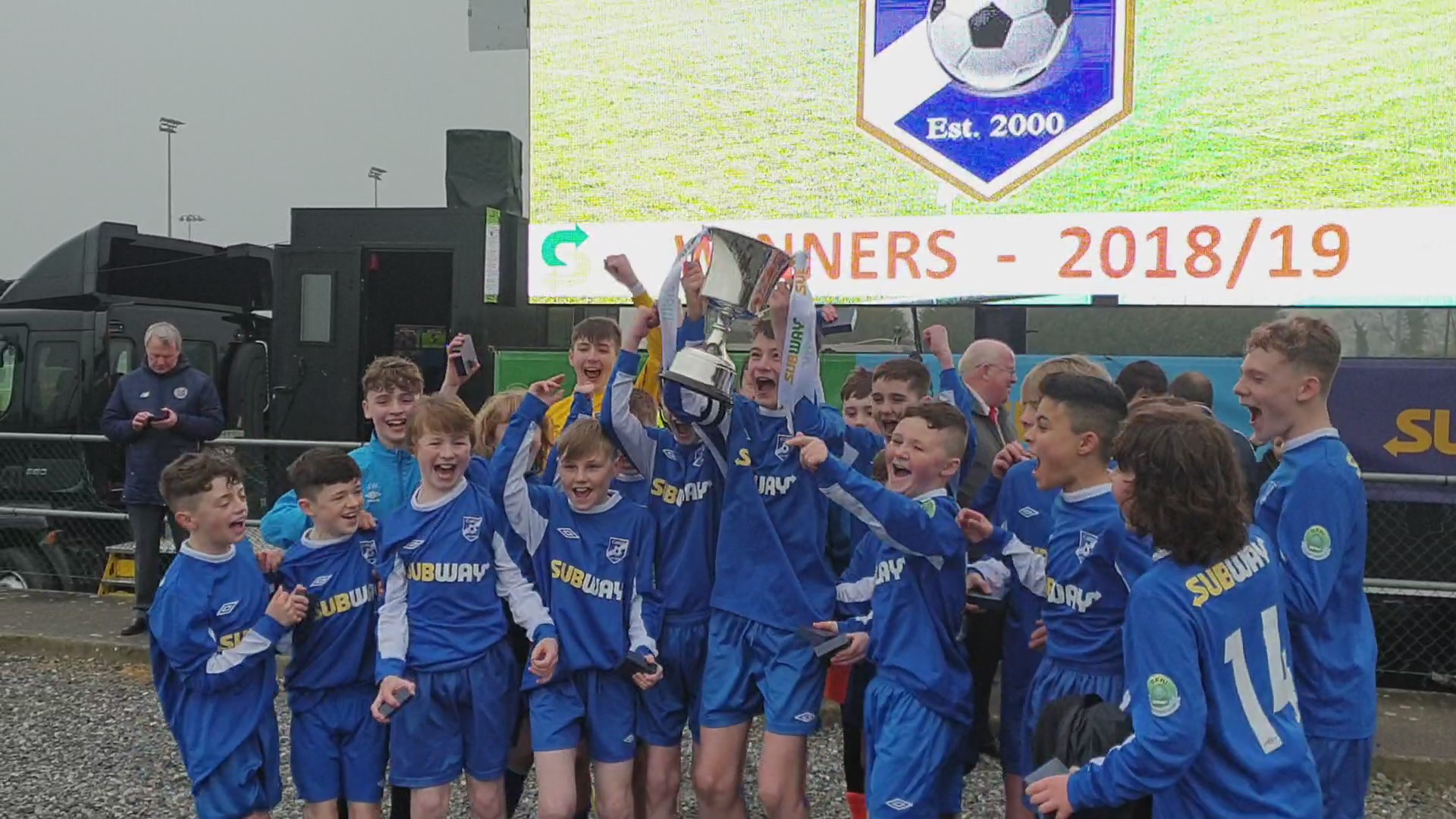 The Cavan / Monaghan Underage League again defied the numbers and continued to create history as its Emerging Talent Program’s Under 13 squad won the SFAI Subway National Championship crown and claimed the inaugural Liam Miller Cup on Sunday afternoon in Gainstown, Mullingar. Following on from last season’s National Plate and “Island of Ireland” success at the same age level, this year’s group overcame all the odds to land the top prize at this level of soccer in the Republic of Ireland. Having come out on top of their section in the group stages they faced a much fancied Limerick Desmond Schoolboys / Girls League at home in the National semi-final overcoming them on a 1 – 0 score-line. That result led them to Sunday’s Final where they faced last season’s Under 12’s Champions the Mayo Schoolboys / Girls Youth League who had beaten a strong Carlow side in their semi-final encounter. Both sides squared off against each other for the Liam Miller Cup which was kindly commissioned by the Miller family in remembrance of the late Republic of Ireland International who sadly passed away last year.

Mayo started the brighter of the sides and had the CMUL under a lot of pressure in the early stages but they found the backline of Daniel Kelly, Sean Og Teevan, Sean O’Connell and Captain Luke Povall not willing to give anything away cheaply. When they did breach the CMUL defence Thomas Brady was in inspired form saving well on several occasions with both his hands and feet. Mayo came close again midway through the first period when they were denied by a terrific goal-line clearance from a combination of O’Connell and Teevan. As the half progressed the CMUL’s midfield of Ben Tully, Luke Allison and Caolain Clerkin began to get to grips with the opponents and they formed a platform for their strikers to cause one or two nervous moments for the Mayo defence. CMUL Striker Matthew Finn had the Mayo keeper anxiously diving to his right but the Glaslough Villa player’s effort was just wide. Enna Owen Carolan and Jack Coombes-Morris were becoming more and more involved on the wings for the CMUL. The CMUL again breathed a sigh of relieve shortly after when Mayo grazed the top of Brady’s crossbar with a well struck shot from just inside the area. It seemed likely that Mayo would open the scoring at this stage of the contest and again they came close just before the interval when their striker flashed a shot just wide of the CMUL upright. The interval arrived with both sides deadlocked at 0 -0. 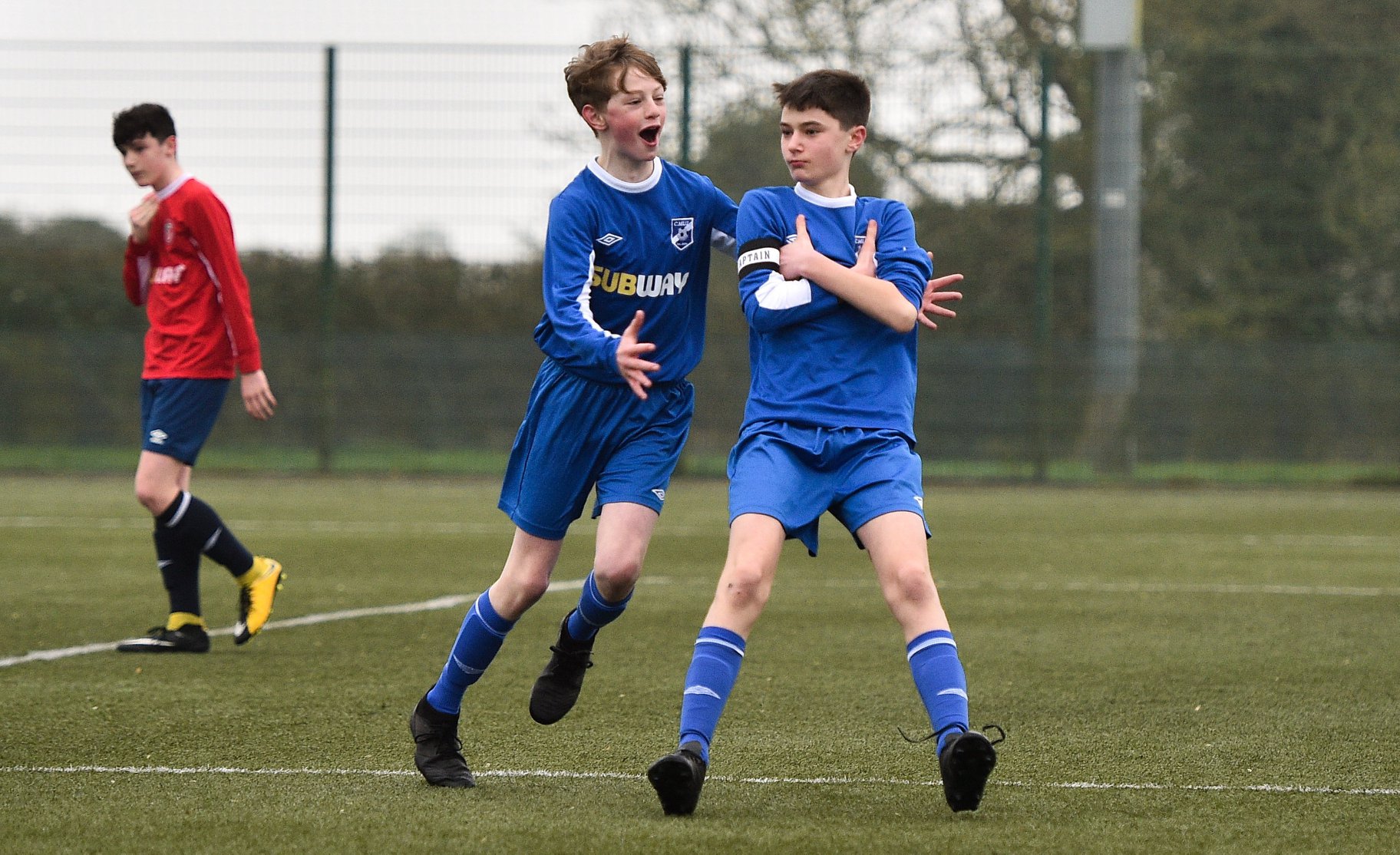 After the break it was the CMUL who seemed to gain the upper hand as they drove forward. Unfortunately the introduction of Adam Mullins at half-time for E. O. Carolan proved to be short-lived as the pacey Carrick Rovers winger limped off injured shortly after the restart. Matthew Carolan replaced him and his presence seemed to give the CMUL a psychological boost upfront. Mayo were still a threat and came close to opening the scoring with a well struck shot from distance that Brady was glad to see sail over his crossbar. The CMUL then took control of affairs as they drove forward looking for an opening score. The ball fell nicely to O’Connell’s feet at the edge of the area, midway through the half but the tall centre-halves effort was off target. Luke Allison and Ben Tully were now the dominant force in the middle of the pitch and it was from a surging run by Allison that the CMUL were awarded a free-kick 40 yards from goal on their left hand side. Matthew Finn made his way towards the dead ball before thumping a shot high towards the Mayo goal. The Mayo keeper did tremendously well to finger-tip the shot onto the underside of the bar before Povall stooped to head the loose ball to the back of the net. This goal really settled the CMUL’s nerves and they went looking for a second goal. It duly came with 7 minutes remaining. Ben Tully and Matthew Carolan combined in the middle of the pitch before the ball was played into Jack Coombes-Morris’s path 30 yards from goal where the winger connected perfectly on the half-volley to smash the ball over the stranded Mayo keeper. Mayo however were not finished yet. They showed the character of true Champions and the introduction a several substitutes had them on the front foot again looking to reduce the deficit. The CMUL also made changes introducing Conor Burns and Jamie McCaughey for Clerkin and the goal-scorer Coombes-Morris to shore up their defence. Mayo threw everything at the CMUL and eventually one of their substitutes, Gavin Forry struck a fantastic shot over Brady’s head and into the far top corner after his initial shot had been charged down by Burns. This gave Mayo great hope but time was against them and this CMUL squad have learned to grind out results lately. They battled and pressed every time a Mayo player had possession and there was great scenes of joy and relief at the sound of the final whistle for another historic success for the Cavan / Monaghan Underage League. 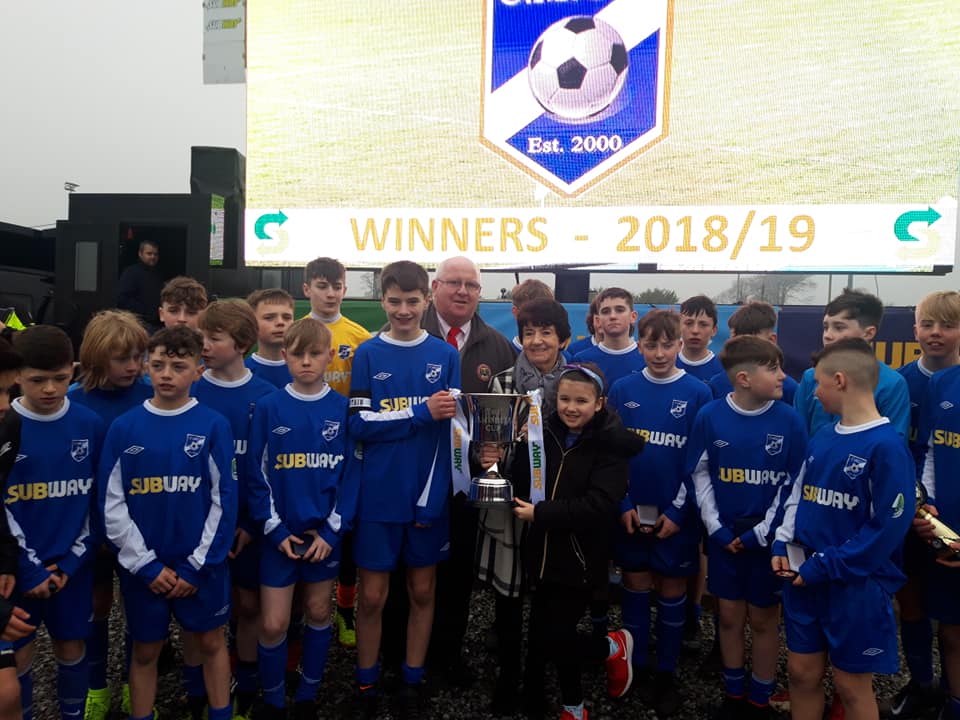 Liam Miller’s Mother and Daughter presented the trophy to the CMUL Captain Luke Povall with the FAI President Donal Conway and the SFAI Chairman John Early in attendance.